Where high-net-worth investors are putting their money

Where high-net-worth investors are putting their money

2017-1-24 - The Globe and Mail - Where high-net-worth investors are putting their money right now.pdf

As much as we may wish otherwise, there is no data point, no computer algorithm, no secret knowledge that can tell us what’s to come in the market or in the economy at large.

The best we can do is to pay attention to what the “smart money” is doing – portfolio professionals, hedge fund managers, famous investors such as Warren Buffett, George Soros and others. What are they preparing for? How are they positioning their portfolios? What assets are they moving into – and out of?

I would also recommend watching the members of TIGER 21, a North American peer-to-peer network for investors with a minimum net worth of $10-million (U.S.). Every three months, members answer an anonymous survey about what they’re buying, selling, and holding. Tracking how these allocations change over time can give you a sneak peak into what successful investors are thinking about and responding to current market events. TIGER 21 comprises about 500 individual members, with groups in most major North American cities. The vast majority of members are self-made investors and business people, with an aggregate net worth north of $47-billion. As a group, their actions function as a kind of barometer for understanding how North America’s wealthiest individuals see the financial future unfolding.

Over the past quarter, TIGER 21 members have become increasingly defensive with their portfolios, even as public markets have climbed to new highs. As always, there are several takeaways from the data.

The most notable move this quarter is how little things have changed over the previous quarter (with one major exception, discussed below). Cash allocation held steady at 11 per cent, fixed income did the same at 10 per cent, and public equity remains at 21 per cent. Hedge fund and private equity were both down 1 per cent each in absolute terms.

All this is a strong signal that HNW investors remain in a “wait and see” defensive posture – a stance they’ve adapted over the past several quarters. Not surprisingly, they continue to be concerned about market valuations and are becoming increasingly reluctant to make big commitments with new money.

As noted above, HNW investors continue to hold steady in their allocations to public equity: Overall allocation remains at 21 per cent, where it’s been since the first quarter of 2016.

What’s most interesting is that this allocation hasn’t budged despite a strong, rapid rise in U.S. equity markets in the final quarter of the year, a move largely attributed to the positive market expectations stemming from the surprise election of Donald Trump. Based on several conversations I’ve had over the quarter with TIGER 21 members and other HNW individuals, the wealthy remain skeptical about the “Trump bump” and its associated market optimism. While they certainly appreciate the rise in the value of their portfolios, they believe reality may not live up to the short-term hype.

As I noted last quarter, the move in part reflects a continued preference to keep money “close to home” rather than overseas. But it also reflects a growing preference for assets that offer non-correlated performance that insulates them from the ups and downs of public equity and bond markets. And, from what I’ve seen, they are willing to give up liquidity in exchange for superior risk-adjusted returns, better cash flow and less volatility.

In general, most TIGER 21 members seem to be in no mood to make aggressive moves with their money. Members expect further volatility throughout 2017, and are actively working to shelter their portfolios from any downturn that may occur. I expect some time in the coming months we’ll look back and consider this to have been a wise move. 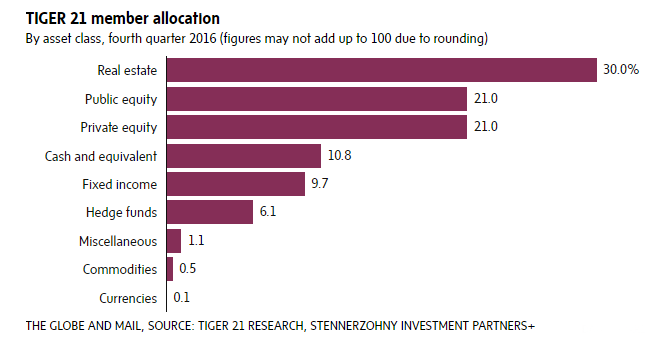