Where high-net-worth investors are putting their money right now

Where high-net-worth investors are putting their money right now

2017-5-8 - The Globe and Mail - Where high-net-worth investors are putting their money right now.pdf

They say imitation is the sincerest form of flattery. And perhaps the most profitable, too. By learning what great investors such as Warren Buffett, Prem Watsa and others are doing with their money, you can get a good idea of what you should be doing with yours.

Another group of people worth imitating is members of TIGER 21, a peer-to-peer network for investors with a minimum $10-million in investible assets. I first became aware of the group during its Canada expansion years ago; since then I’ve had the pleasure of meeting several members. They’re smart, savvy people who are exceptionally aware of financial trends and events – and exceptionally good with money.

Every quarter, TIGER 21 members answer an anonymous survey about what they’re buying, selling and holding. By tracking these changes, you can get a kind of “inside look” at how some of the world’s most successful investors are reacting and adapting to current market events.

There are currently over 450 individual members in TIGER 21, spread among several dozen groups in major North American cities. With an aggregate net worth of $50-billion, they’ve proven how adept they are at building wealth. As public markets have steadily risen since the start of the year, TIGER 21 members have made some interesting changes with their portfolios. Three points strike me as particularly notable here:

The most notable shift during the quarter was the strong increase to real estate – from 30 per cent of the portfolio to 32 per cent, an increase of 6.6 per cent.

The allocation is now at the highest level since TIGER 21 started its survey back in 2007. Over the past year, members have increased real estate allocation by 28 per cent.

I’m interested in whether this increase represents new money investment in real estate, or growth in valuation of existing holdings. It could be both: Over the past year or so, wealthy investors have expressed a strong desire to shelter the portfolio from market volatility, and real estate (particularly larger residential/commercial development projects HNW investors favour) can help here. That increase in demand has helped push up valuations. I’ll be keeping an eye on future allocation reports to see how this plays out.

Wealth protection is likely the reason behind these moves. The wealthy have been holding “dry powder” in cash for several quarters, and with the U.S. Fed signalling a rise in interest rates, it’s probably time to move out of bonds. I do find the reduction in hedge funds and private equity counterintuitive – the time seems ripe for assets offering non-correlated performance – although from what I can see, the move seems more of a preference for real estate rather than a repudiation of these assets.

Enjoying equity gains (while they last)

I’ve been interested to know what wealthy investors think of the strong year-to-date stock market performance. TIGER 21 members seem to be enjoying it, as they continue to hold public equity allocations to 21 per cent of their portfolios.

It’s interesting this allocation hasn’t moved much over the past several quarters, despite a growing chorus of “this won’t last forever” from market watchers. Based on recent conversations I’ve had, wealthy investors are concerned about equity valuations, and almost everyone agrees there’s a relative lack of bargains right now. While they certainly appreciate this year’s market runup, they remain skeptical about the boundless optimism currently on display. 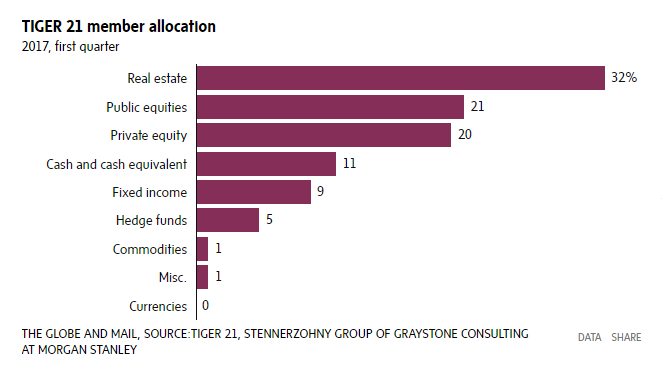