How the ultra wealthy are positioning their portfolios

How the ultra wealthy are positioning their portfolios

2016-08-02 - The Globe and Mail - How the ultra wealthy are positioning their portfolios.pdf

No matter what their net worth, most investors share a common goal: build new wealth while protecting what they’ve already built.

The question is, how do you do it?

My suggestion: become a student of the wealthy. By following what successful high-net-worth (HNW) investors are doing with their portfolios, you can become better at building and protecting your own.

One tool that can help is the quarterly member survey from TIGER 21, a North American peer-to-peer network for investors with a minimum net worth of $10-million.

Every quarter, the network asks its members to anonymously fill out a confidential survey about where they hold their money, where they’re allocating new money, and how those decisions have changed over the past quarter. Tracking the change in these allocations over time can give you a sneak peak into what the “smart money” is currently doing and thinking about opportunity and risk.

Since its founding in 1999, TIGER 21 has grown to an active membership of about 400 individuals with an aggregate net worth of over $40-billion, with groups in most major Canadian and U.S. cities. Its members are all highly successful investors and capital allocators. Collectively, their thoughts and actions represent an impressive store of wisdom for those looking to become better investors.

Looking back at the past quarter, we’ve seen public equity markets test new highs against a backdrop of continued economic and political uncertainty. These somewhat contradictory signals have caused TIGER 21 members to become more cautious as they position their portfolios for continued volatility. 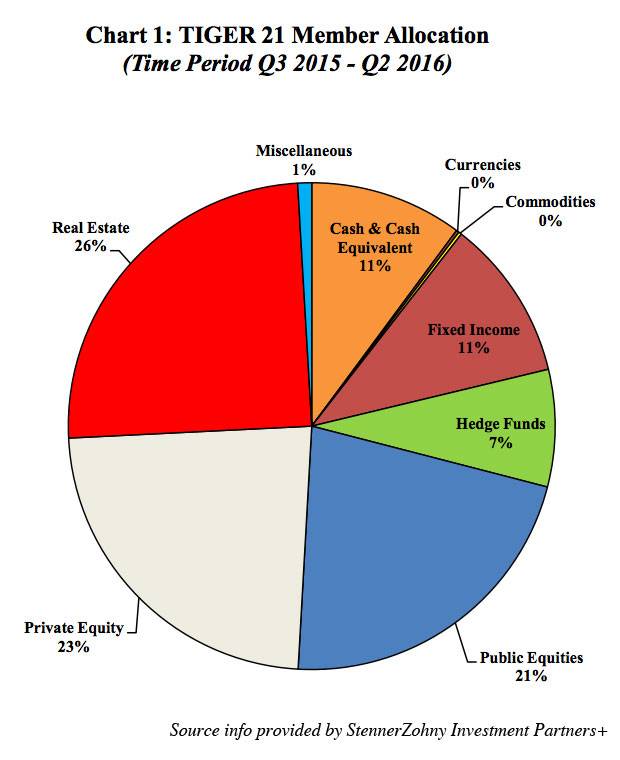 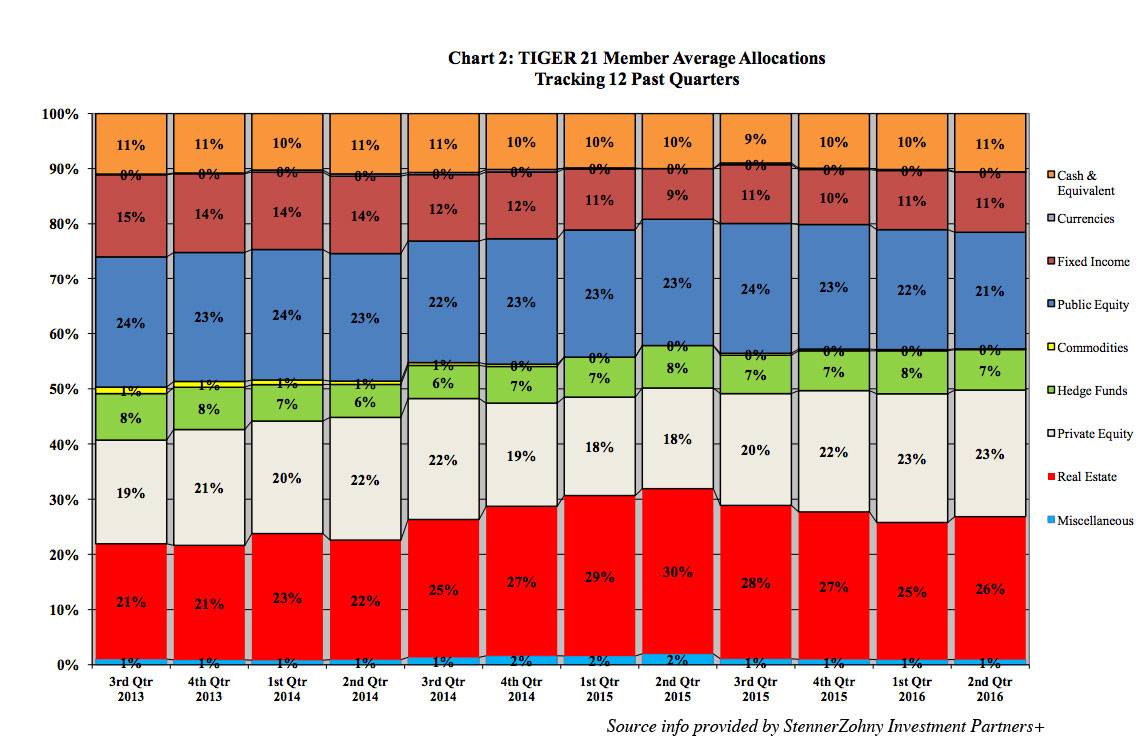 There are a few important takeaways from these data that stand out to me:

One of the most notable changes was the shift into cash. TIGER 21 members now have 11 per cent of their holdings in cash, up 1 per cent for an absolute increase of 10 per cent. The last time the cash allocation was this high was in the third quarter of 2014.

The move confirms what I’ve learned from my own recent conversations with HNW individuals: the “smart money” sees the market as fairly to slightly over valued. As a result, they’re positioning themselves to take advantage of further volatility by storing up dry powder.

Another takeaway: the continued profit taking of public equity. Allocation has declined by 1 per cent to 21 per cent of the overall portfolio, a continuation of a trend that’s been happening since the third quarter of 2015. Allocation has not been this low since the end of 2011.

It’s fairly easy to understand why. While they aren’t sounding the alarm bells just yet, most HNW investors don’t see the risk/reward equation of equities as attractive right now, especially considering economic (the threat of deflation; a slowdown in China; central banks printing money) and political uncertainties (a contentious U.S. election; Brexit; strife in the Middle East). In such an environment, taking money off the table seems the prudent move.

Also interesting was the continued confidence in private equity, and a renewed confidence in real estate. The average TIGER 21 member has 23 per cent of the portfolio allocated to private equity, the highest allocation since the group started its quarterly surveys in 2007. Real estate increased by 1 per cent and now stands at 26 per cent, the largest allocation of all assets and well above the long-term median of 23 per cent.

What’s interesting here is the resilience of such confidence: even as they expect increasing volatility in the coming months, TIGER 21 members remain firmly committed to these longer-term asset classes, partly because of a lack of opportunities elsewhere, but also because of the non-correlated performance these assets offer.

Overall, TIGER 21 members are currently “de-risking” their portfolios, something they’ve been doing over the past several months. While they’re not yet in full defensive mode, most continue to trim back speculative positions, and remain cautious about putting new money to work. It’s probably a good idea for everyone to do the same.